The Venu 2 Plus seems to be one of the upcoming products Garmin is going to release. Often enough leaks originate from online shops that list new products before they are officially announced. This time it has been Garmin, accidentally publishing information about the Venu 2 Plus on their support pages. Let’s see what we’ve got.

There isn’t much information that Garmin has put online and although there are some additional online retailers listing the Venu 2 Plus online, information about the wearable is really sparse. As they are piling up week by week, let me compile all the information available so far.

Venu 2 Plus comes with three buttons

Thanks to Garmin, they did not only leak the mere information about the Venu 2 Plus but also a small press render. The Venu 2 Plus most closely resembles the Venu 2S in light gray/silver. The most noteworthy change so far is a third button on the housing’s right side. According to Dave Zatz (@davezatz) the button “supports microphone capabilities”, that would allow for answering phone calls using the smartwatch. Additionally provided (but for the time being inofficial) press renders support this assumption.

Today I can add some information about the new features:

As the Venu 2 Plus doesn’t support LTE – at least I haven’t found any information about it – a paired smartphone must be in reach to use these features. 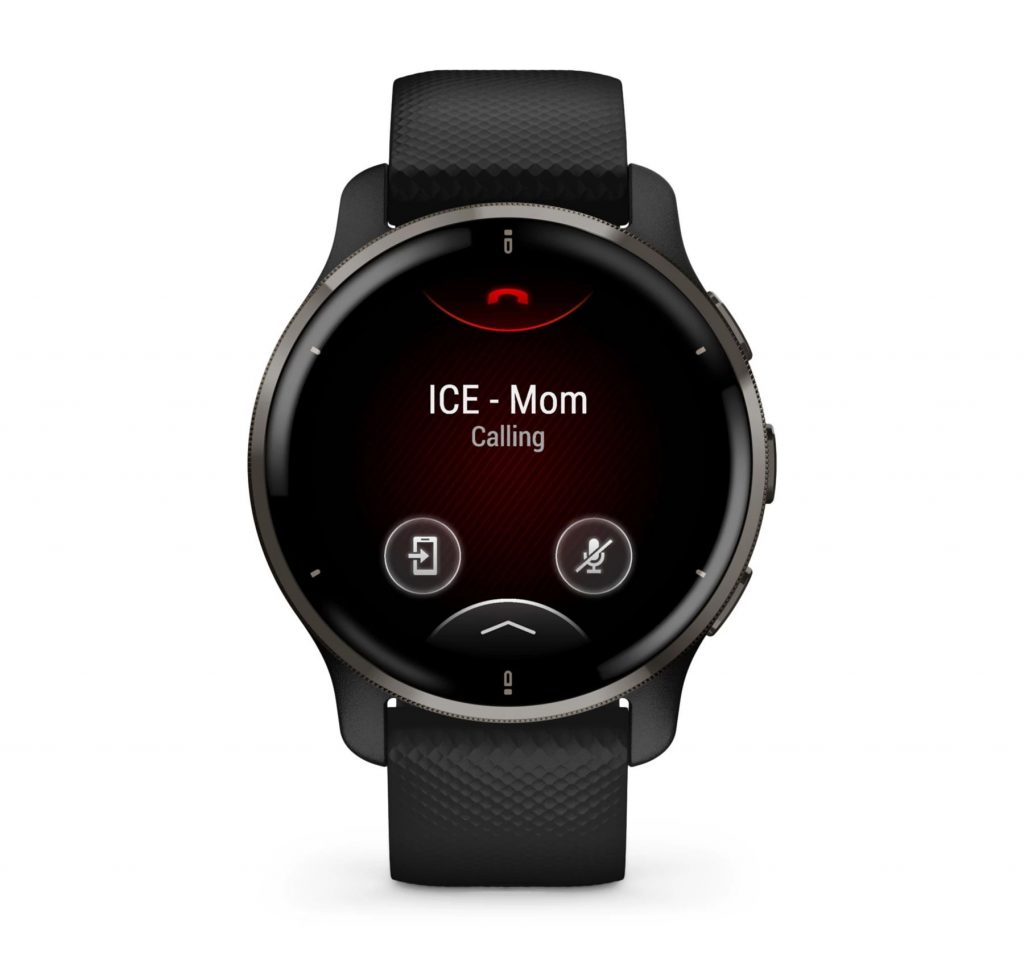 The added functions affect battery life, but no that much.

Until the product is officially released, you should consider this information as uncertain at best.

Back to comparing sizes: At first sight the Venu 2 Plus resembles the Venu 2S. This mainly is because of a smaller bezel resulting in a 2 mm smaller housing. The smaller appearance allows for using a 20 mm quick release wrist band (in contrast to the Venu 2’s 22 mm wrist band).

The watch will be available in these colors:

The watch is apparently listed under ID IPH-04125 at the FCC. At least that’s what I think as the description fits quite well. So do the instructions on how to access the regulatory information on the watch itself.

Concerning the FCC documents, there always is a part that is publicly available right from the beginning. Unfortunately these rarely allow for concrete conclusions about the product. Other parts are kept confidential until the product has been launched by the manufacturer. For some documents there is an embargo that expires on April 10, 2022.

Because the product has surfaced not only on Garmin’s support pages, but also in some online shops (e.g. sportshop.com), my guess is that we’ll see the Venu 2 Plus much sooner.

Price-wise, the Venu 2 or Venu 2S is currently available for just under $400, so a $450 price tag doesn’t seem unrealistic.

UPDATE 12/02/2021: A first online retailer in Thailand lists the Venu 2 Plus at about 15,000 TBH which translates to almost $450. You may argue that drawing a conclusion with respect to the US prices is difficult, but my guess is that you can expect the Venu 2 Plus to land between $429 and $479.

Come back now and then to check for updates…